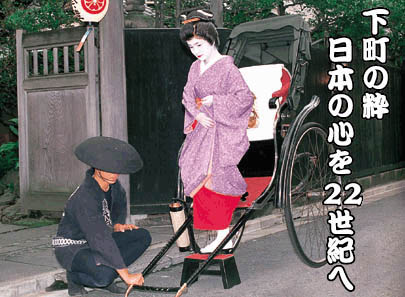 Rickshaw runs. Struggling with slopes, slithering through narrow alleys, threading through residential areas.
Kicking through cold snow, passing under bloomed flowers, stepping onto fallen leaves, going against fierce gusts.
Rickshaw is slow. Much, much slower than an airplane, a car, even slower than a bicycle.
In this era, we can have a day trip from Hokkaido to Okinawa while rickshaw could take an hour to go to the next town in some cases.
Modern technology enables thousands of people to be transported while rickshaw carries only one or two passengers at most.
We, however, love this vehicle which runs on human speed.
We love this vehicle which has an ability of human beings’ limitation.
Travel became nothing but a way of transportation, as its time was drastically cut.
Accommodation is just a place to stay, as time-consuming booking process was dramatically saved.
Towns turned into cities. Roads lost its soil, landscape lost its alleys.
Our grasses, grounds, trees, forests are all gone.
Instead, we have wealthy life around us, but…
Look. We wonder if we are missing something on our way.
JIDAIYA runs rickshaw.
The driver skilfully avoids street pebbles, balances his vehicle on ramps to mitigate uncomfortable wobbling.
Passengers appreciate his consideration by giving eyes to his sweaty back silently.
Driver and passengers are blended into one unit.
Rickshaw runs. With a man on it. A man runs. Runs into the era. JIDAIYA runs.
With a heart of once-in-a-life-time encounter.